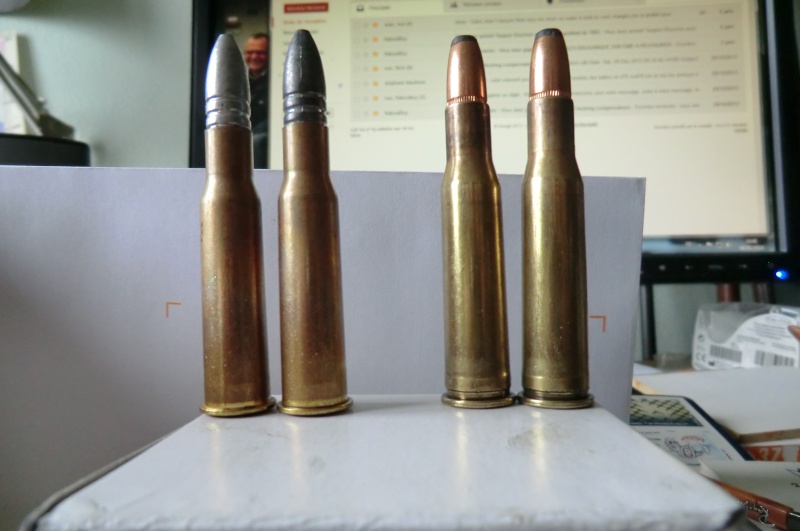 And cautions on loading the 8x58R Danish in the Swedish Rolling Block
Revised July 30, 2008

First off, I don't think I know everything about rolling block rifles. I also don't think I know everything about the 8x58R Danish cartridge, known in Sweden as the 8x58RD. But I do know alot about the 1889 Swedish rolling block that fires the 8x58RD cartridge. In this application of the 8x58R Danish cartridge I've seen big trouble with handloading information, so much so that I wrote to Norma Precision in Sweden and asked for help. Norma Precision knows more about the 1889 Swedish rolling block and its application of the 8x58RD cartridge than anybody, anywhere in the entire world. What information I disseminate here comes from NP in Sweden.

What prompted this concern was an article in Shotgun News on handloading the 8x58RD for the 1889 Swedish rolling block. It left my mouth agape in abject fright at what it was presenting. It may take years to hear of the rifles coming apart and the people being hurt or killed as a result of unresearched load data. I lost sleep over this irresponsible act of publishing such dangerous load data. I had some private discussion with other handloaders who I know and who I know to be very experienced and who's opinion I trusted. There was no one who wasn't as angry and concerned as I was.

During the research there was an incident in Sweden. An accident. A death. It concerned a 1867 rolling block that came apart. The breechblock split in two and lodged in the eye socket.... behind the eye socket.. of the shooter. It took a couple/three days for him to die. We have photos of the rifle that came with the permission of the Swedish national forensic laboratory to share in the interest of spreading information and caution on the subject of rolling block safety.

Cartridges of the World by Barnes has bad data on the 8x58R Danish cartridge. COTW shows load data for 8x58RD with nothing to back it up. It states no application for the load data. It would seem to the reader that if it's 8x58RD then its A-ok for anything chambered in 8x58RD.

Commission Internationale Permanente pour l'Epreuve des Armes à Feu Portatives, C.I.P. for short, is the European equivalent to our SAAMI, Sporting Arms and Ammunition Manufacturers' Institute. As with SAAMI, CIP puts out cartridge drawings with some basic information on that particular cartridge. Norma in Sweden sent me their CIP drawing along with a couple other PDF files.

See below for the cartridge drawing sent to me by Norma of Sweden and pay attention to the maximum average chamber pressure: 3200 BAR.

Think about 46,412 psi in a rolling block built between 1867 and roughly 1876 and re-case hardened in roughly 1891 to 1896. This is about the maximum average chamber pressure for the small ring Mauser like the 1896 Swedish Mauser in 6.5x55. This is an insane amount of pressure to expect from a 130 year old rolling block action.

The Norma load data below is from an older 1960s-70s era factory manual. Norma sent this to me. You'll notice down at the bottom, the 8x58RD data. In the far right columns are the pressures listed in both PSI and "atm" meaning atmospheres... BAR. See the numbers? The highest is 1950 BAR. Now go back and look at the CIP maximum average chamber pressure of 3200 BAR. The psi of 1950 BAR is 28,282. Do you see how nicely that agrees with the Norma loading data?

The 3rd image below is from the highly respected Norwegian Ladeboken (Load Book).

How can this be?

The preface of the Norwegian Ladeboken wasn't sent by Norma so I aquired it through a friend in Sweden, and he translated for me:

The Danish military cartridge of 1889 is not a common
sight today. The Danish Krag Jörgensen rifle is rarely
used today, but the cartridge was chambered also in
Danish, Swedish and Norwegian Remington rolling block
rifles, and these are stumbled upon fairly regularly. Some
people like to shoot these old rifles, so therefore we
have included loading data for it.

Originally the cartridge was loaded with a compressed
black powder charge, awaiting the final development of
the smokeless powders. The first military cartridge had
a 14,7 gram (226 grain) roundnose bullet, loaded to a
(velocity) of about 485 meters/second (1,591 feet per second).
In later smokeless loads the velocity was increased to 620 m/s
(2,034 feet per second) using the same bullet.

In 1908 the Danes went over to the so called "spidsskarp",
a cartridge loaded with a 12,7 g (196 grain) spitzer bullet where
the velocity was a claimed 750 m/s (2,460 feet per second).
The experience with this cartridge was, however, that it was too
powerful for the rolling block rifles, and a reduced charge load
using the Dane bullet was developed for these rifles.

Until the 1960's, Norma made a factory load in 8x58RD
using a 12,7 g (196 grain) soft point and a claimed velocity
of 680 m/s (2,234 feet per second) ,with respect due to the many
rolling block rifles being used for hunting in Sweden. Norma also
made a batch of M1908 spidsskarp for Denmark, using these
same figures.

The loads presented here are being held to the same
levels, and can be used in both Krag-Jörgensen and
rolling block rifles. Original cases uses Berdan primers,
but new boxer primed cases are available from Bertram.
Loading dies are available from RCBS.
[end translation] 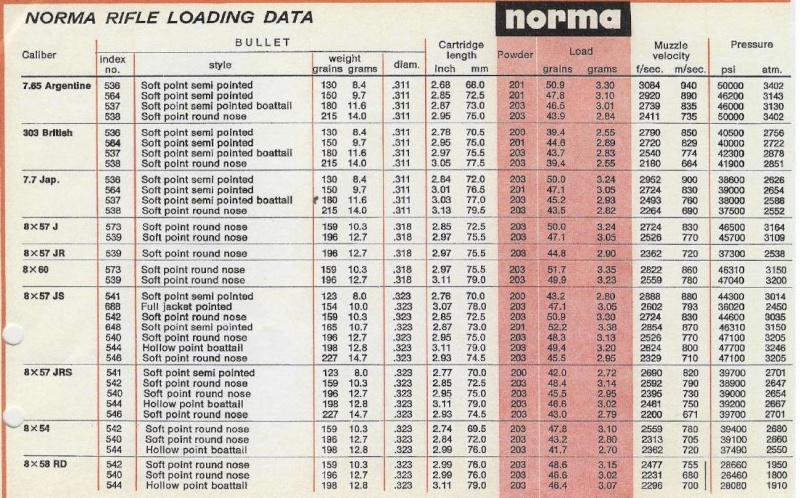 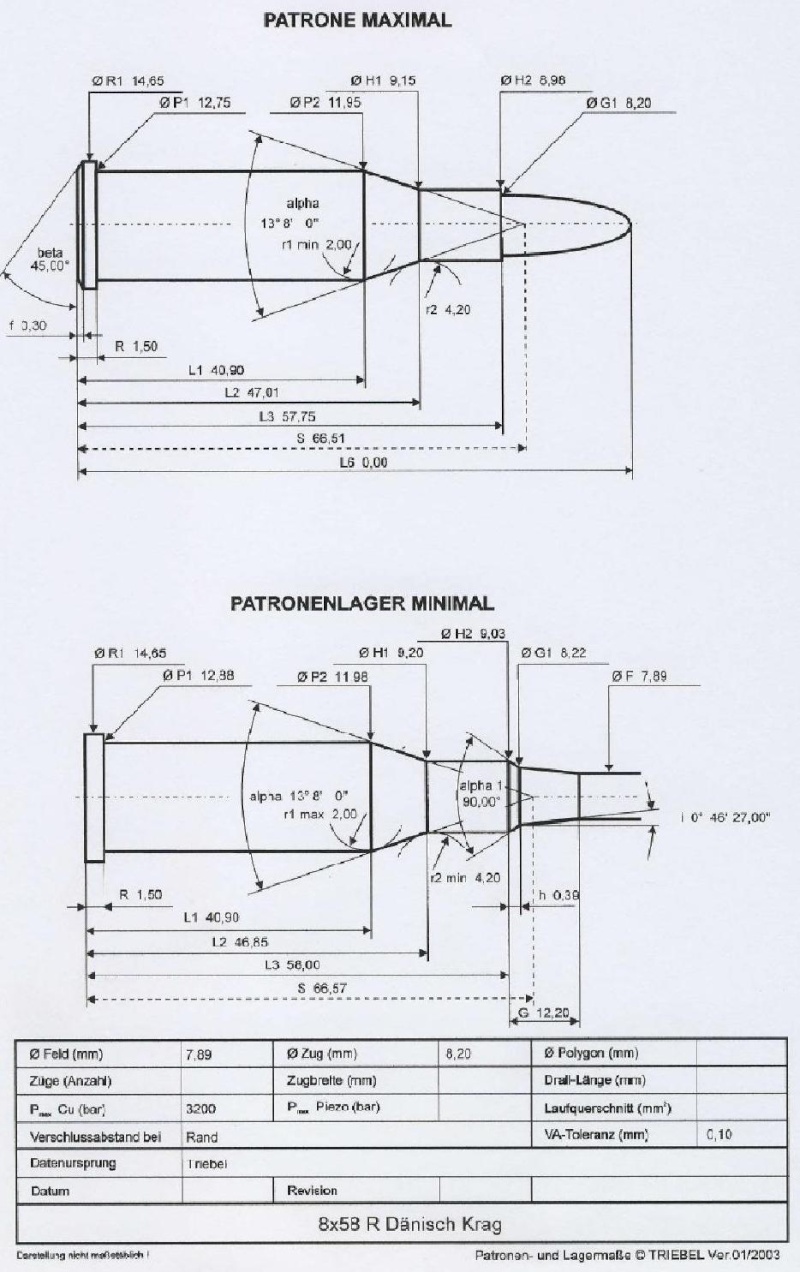