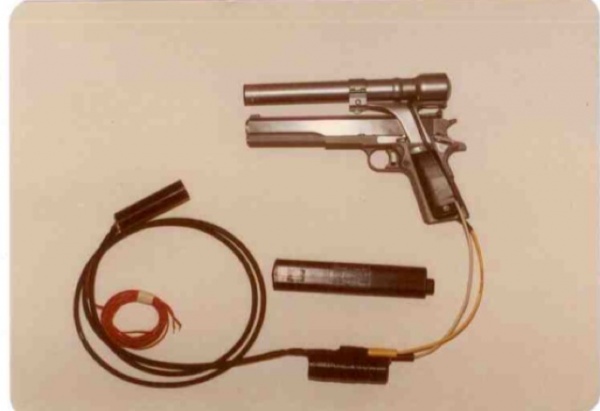 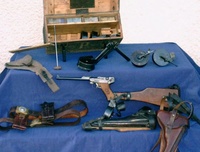 *RARE AND IMPORTANT DWM HITLER GUARD "NIGHT PISTOL" LUGER WITH FLASHLIGHT ATTACHMENT & HOLSTER. SN 1110t. Cal. 30 Luger. Extremely rare Hitler Guard pistol with 4" bbl, DWM scroll on front toggle link & crown "N" proof on left side of receiver & bottom of bbl. It has rare grip safety with "T" serial number range & correct wood base magazine with full checkered walnut grips. Gesichert safety marked in lower position. Right side of frame, above trigger, is stamped with a crown & large "S" proof. Accompanied by a unique & very unusual, precisely machined, anodized brass flashlight made to slip over the end of the bbl with about 3/4" ears that fit over each side of receiver & rest on receiver rails. This flashlight has its lens directly below and aligned with the axis of the bore with battery pack in a rectangular base at rear with a clip attachment for a wire to plug into a brass socket that is connected to a brass plate at top front of right grip. There is another brass plate riveted in place at bottom of right grip, all of which are connected with brass plates fitted into milled recesses inside grip so that when a person grips the pistol the skin conductivity makes a connection & illuminates the flashlight. It is believed that the flashlight & battery pack were carried separate from the pistol, probably in its own leather pouch. In Peter Hoffman's book Hitler's Personal Security he mentions the existence of these 30 cal night pistols with tracer ammunition & flashlight used by an RSD officer in constant patrol around the Fuehrer's bunker. Consignor states that the only other known of these rare flashlight pistols is on display in a military museum in Germany. Accompanied by a special configuration,black leather holster that has an extra wide opening flap on the rear side that exposes the pistol butt & trigger, obviously so the user could unholster his gun quickly. Inside the flap has a narrow tool pocket. Front edge of holster, in its usual position, is the spare magazine pouch containing an extra wood base magazine. Back of holster is completely unmarked with the unusual flap marked "D.R.G.M." and the spread winged eagle with crossed rifles over "AKAH". This is the only example of this pistol, flashlight & holster known to ever be offered at public sale making it one of the most rare of all Lugers & accessories. Many years ago, Mr. Smith purchased this pistol from Dick Anderson , who had bought it directly from a GI who acquired it while in Germany. To our knowledge, this is the only one currently in private hands. PROVENANCE: Doug Smith Collection. CONDITION: Extremely fine, numbered parts are all matching. Overall retains about 97-98% crisp orig factory blue with only slight muzzle edge wear & high point wear. Small parts retain about 88-90% orig factory straw colors with some slight hammer marks on lock bolt. Grips are very fine to extremely fine with sharp checkering and minor diamond point wear & a bruise on left side. Brass fittings are fine with a medium mustard patina. Flashlight attachment for the bbl is extremely fine, retaining about 95-96% orig black finish. Wire & male connector for female socket on grip is missing. Orig clip on bottom of flashlight retains most of its orig black finish. Mechanics are crisp, brilliant shiny bore. Holster is very fine to extremely fine with flap & body retaining most of its orig black finish with the flap retaining about 80% orig brown finish with light wear & flexed lines. Strap has been restitched & shows moderate to heavy wear. Extra magazine & takedown tool are extremely fine. 4-36120 JR223 & BS (80,000-100,000)
------------------------
Cordialement...Patrice.... lu1900@gmail.com