"The 9mm Parabellum Model 1938A Beretta was the first of a series of very well designed finely-made weapons, which were widely distributed in other countries in addition to Italy. The Beretta Model 38A and 38/42 were considered the finest Italian small arms in service in World War II. The first Model Beretta 38 had longitudinal slots in the barrel jacket as opposed to holes in the barrel jackets of later production. Some Model 38As had folding bayonets, and early production had bayonet lugs for the mounting of a removable knife type bayonet.

This model was sold to Romania and Argentina and was made in tremendous quantities for the Italian Army. The Model 38A produced to some extent after World War II, and in 1949 a modification of the weapon, using the cross boss safety mounted in the stock as used with the Model 38/49 (Model 4) was produced in limited quantity. Although it has generally been considered that the fixed firing pin was introduced with the Model 38/42, late Model 38As with a fixed firing pin were apparently made. It is quite possible that these weapons were made after the introduction of the Model 38/42, since the Model 38A was made as late as 1950.

The Bereta 9mm Parabellum Model 38/42 is basically a simplified Model 38A; the barrrel jacket is not used with the 38/42 and all Model 38/42s have a fixed firing pin. The 38/42 uses a stamped receiver and magazine housing and has a fluted barrel (early production). Models of the 38/42 with smooth barrel are called 38/43 by Beretta. There are three distinctly different models of the 38/42 - 38/43, and an additional similar weapon, the 38/44, has a shorter bolt but does not have the operating spring guide found on the earlier Berettas. This can be noted by the absence of the recoil spring guide rod head protruding through the cap on the end of the receiver. .. Pakistan, Iraq and Costa Rica purchased the Model 38/44 submachine guns.

An unusual Beretta Model 38A submachine gun, which apparently appeared in prototype form, has an aluminum barrel jacket rather than the multi-perforated barrel jacket. Another Beretta, which appeared only in prototype form, was the Model 1. This weapon was developed prior to the Model 38/42 and has a folding stock similar to that of the German MP38; it was apparently an expensive gun to make and was dropped in favor of the Model 38/42. A gun called the 38/44 Special by Beretta closely resembles the Model 1 but does not have the fluted barrel of the Model 1 and does not have a cross bolt type safety mounted in the foreend. This weapon is also called the Model 2.

The Model 5 was introduced in 1957. Another weapon somewhat similar in appearance to the Model 2, and also made only as a prototype, is the Model 4. The Model 4 has a grip safety and a sliding-wire type stock similar to that on the US M3 submachine gun...This weapon is described as a modifieid 38/44 by Beretta..."

"...the weapon may be fired either full or semiautomatic. A dust cover on the magazine port keeps out dirt when carrying unloaded. The magazine enters from the bottom, and the ejection port is on the right hand side of the tubular receiver, just forward of the operating handle, which, incidentally, is free of the bolt and does not move with it in action, serving only to cock it, as in the case of our B.A.R. Fire is controlled by two triggers, front for semi-automatic fire, rear for full-machine action. A regular safety on the left hand side of the receiver locks both triggers, and in addiiton, there is a cross-bar in the trigger guard which can be used to block the rear or full-automatic trigger, keeping the weapon semi-automatic.

The little gun is easily taken down for cleaning - just press the "button" in the back end of the receiver, rotate the knurled sleeve which covers the back end until the arrow impressed thereon is in a vertical position and pull off the sleeve.` A one-hand operation requiring about one-tenth of a second. The bolt with its self-contained operating spring and its guide slides out, nothing being under tension. The ejector, fixed in the receiver, does double duty as the hammer in firing. The gun fires from an open bolt.

The Beretta 38 is my favorite gun of its class, as it was of the Eighth Army. As easy to fire and control as a .22 sporting autoloader, it had terrific punch and range. The special 9mm cartridges loaded for it made it effective at 300 yards and dangerous up to 500 (when you consider that the .45 Thompson is an even-money bet at 100 yards, you'll understand why we liked the Beretta). It would operate well with German, British or American 9mm Luger ammunition, but not alt all with the lightly-loaded Italian Glisenti pistol cartridges. They would not recoil the bolt far enough to engage the sear, causing full-automatic fire every time the trigger was touched, because they would throw the bolt back enough to pick up a fresh cartridge from the magazine, and chamber and fire it, repeating the cycle as long as ammunition remained in the magazine.

the later model guns were equipped with bayonet studs, and with a fixed bayonet and a ten-round clip they were the answer to a soldier's prayer for guard duty of any kind - prisoner chasing or just keeping them out of the mood for argument. All the guns were really accurate and a pleasure to shoot. No one ever bothered with any other kind of submachinegun if he could get hold of a Beretta M38 and keep it. The New Zealand boys especially loved them. Even the Germans liked it, and they hated to admit anything was good except their own stuff. A full-length canvas case was provided for them and magazine-loading tools. Ammunition was furnished in 10-round Mauser style clips and by use of the loader could be stripped straight into the magazine the same way a Mauser type bolt action rifle is clip-loaded through the top of the receiver." 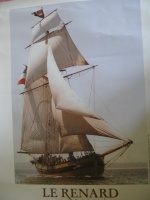 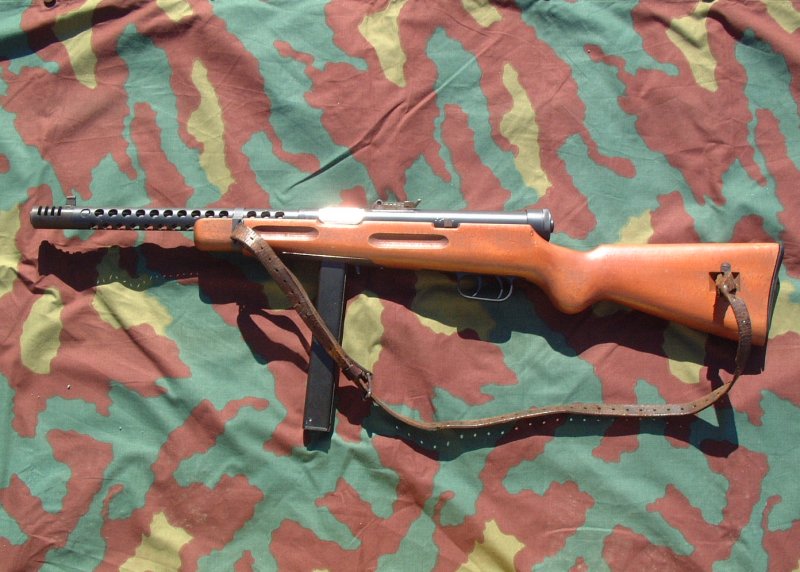 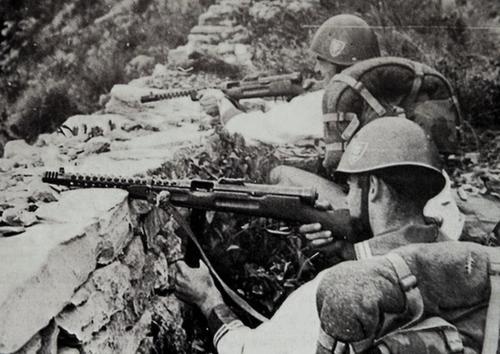